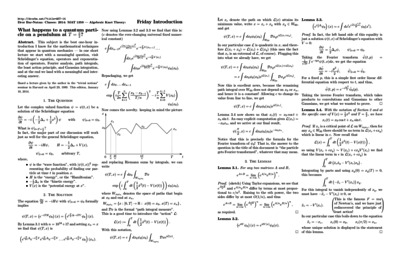 A solution to this is $y(x) = \frac1{\lambda}cosh(\lambda x + c)$, where $\lambda$ and c are determined by physical constants and the boundary values of $y$ (at $x = -L$ and $x = L$). It turns out that this ODE is the same one you get when solving the soap bubble problem (HW 2, problem 3), since the Lagrangians of the two systems are the same up to constants.

. This now becomes a single variable minimum/maximum problem. We set

Integrating by parts with

, this is equal to

The first term is equal to 0 by boundary conditions of

, so we obtain the equality

, exactly as stated in the conclusion of Lemma 3.4. Solving this ODE with initial conditions gives the desired result. Explicitly, the solution of this ODE (with

0:26:27 [edit] Just some generalization for the least action principle and Euler-Lagrange equation for the classical cases. In the calculus of variation, we have developed a tool for describing various physics situation. In general, let

be the coordinate of a particular configuration space and

be its time derivative. Then, the action is described as

are the initial time and final time, respectively. The integrand

is known as the Lagrangian and is assumed to be time-independent for convenience. The idea here is to find the path that minimize the action

. Now, we introduction the idea of variation, which can be viewed as an infinitesimal shift from the original path; however, it does not change the terminal points. Since the path we are interested is the path that minimizes the action, then the variation of the action should be 0 and that is

Then, by the integration by parts, we have that

since the boundary term does not vary so that

. Thus, we arrive at the point where the classical particle must obey the path where the equation

This equation is known as the Euler-Lagrange equation.

0:28:51 [edit] To demonstrate how to use the Euler-Lagrange equation in classical mechanics, we solve brachistochrone problem as an example. The problem is described in the blackboard shot, which is to find the path of a particle that minimizes the time

in a uniform gravitational field. In this situation, we assume there is no friction along the path; thus the energy is conserved. Let

be the vertical coordinate. Then, by the conservation of energy, we have

may be described as

is the infinitesimal arclength of the path. Then, let

be the horizontal coordinate, we have

Thus, the above equation would be

, we apply the Euler-Lagrange equation and obtain

is some constant. Then, we rearrange the equation and obatin

Then, we can solve this equation with parameterization and obtain the final result